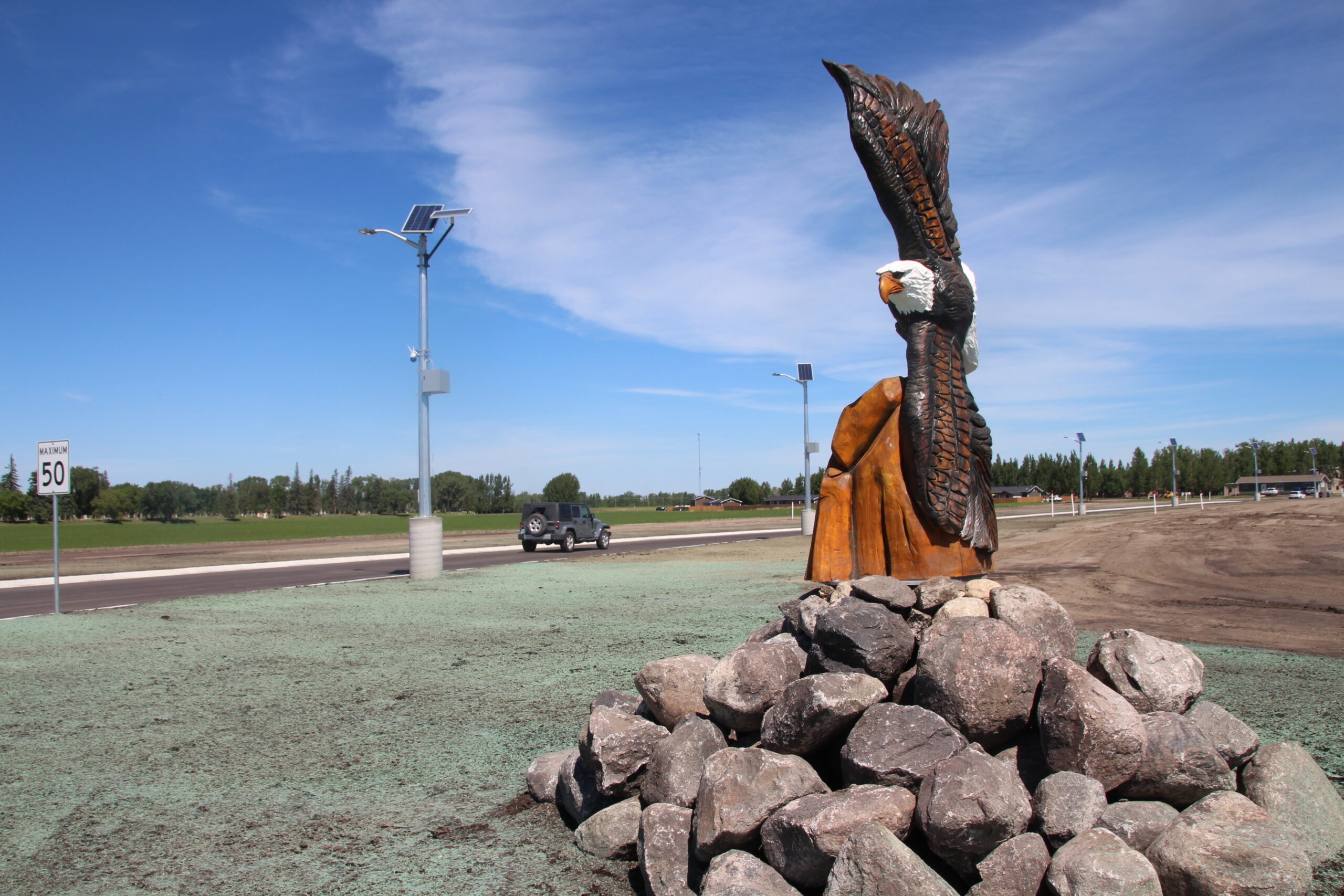 Representatives from the City of Portage and RM of Portage were there along with executives of the contractor involved in the work and other First Nation officials, as Meeches led the ceremony. He also played a drum and sang in dedication of the event. 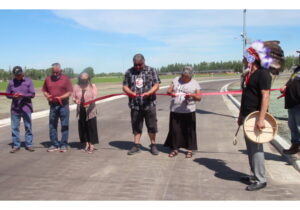 “Today is an important day for us,” says Meeches. “We are having our grand opening of Ginew Street. Ginew in our language means ‘eagle.’ It’s Phase One of the truck stop that we’re working on.”

Meeches notes the day was beautiful for the event and elaborates on the use of the name Ginew.

“As you drive down the street, there is the unveiling of a new wood carving,” continues Meeches. “I believe that the wood used for that woodcarving came from the cottonwoods on the property over there. And then it just leads up to the eagle that’s just down the road here. So, it’s appropriate for the naming of the street as Ginew.”

Meeches extends his thanks to all who came to the opening.

“There’ll be a lot of development,” notes Meeches. “This opens up a whole new area for us for commercial developments, and I’m sure we’ll be making some announcements sometime soon on what will be built here on this site. The opportunities for economic development are really a big part of who we are as Long Plain First Nation moving forward.”

Meeches says a large monetary gift was given from the company involved in construction.

“We also received a substantial donation from Ernst and Hansch and the companies that they represent,” adds Meeches. “They made a $20,000 donation to the residential school museum. We had scheduled a fundraising event in the past few months for June 20th,” continues Meeches. “Because of recent events with the discovery of lost children that were found on the mass grave site, we decided to put everything off till August 3rd, which is the 150th anniversary of the Treaty. So, we’re hoping to do that event. It’s a virtual event. We have a lot of companies that have made donations so far, and will be acknowledging all of those companies.”

He says Phase Two of the project will see the development of infrastructure on the south side of Yellowquill Trail.

“But the challenge for Long Plain First Nation would be the reserve creation on this property that would need to happen,” says Meeches. “The second challenge we have is getting the support of the Province of Manitoba on the controlled intersection here at TransCanada Number 1 and Yellowquill Trail.”

He adds they also need to work with the City of Portage on water supply, noting all is suitable for the time being.

Meeches says it’s been over 20 years since the property was first purchased by Long Plain.

“So, the challenge of getting lands converted to reserve status has a been a big issue for, not only Long Plain, but First Nations across the country. We hope to achieve that sometime in the near future. I just don’t know when. It definitely should have been done by now, but it does take time.”